This article was found in the May edition of Pacific FIshing . Crab stocks in Bristol Bay and Kodiak are dwindling . The goal of the Kodiak lab is to find answers to why these crab are not returning. Crab take 8 years to reach maturity so for populations to rise you need several good years in a row to see a healthy recruitment. The lab is studying ocean ecosystem patterns , crab diets, and crab reproduction currently. Some interesting facts from the article are red king crab will eat their babies but blue king crab will not. Golden king crab can resist ocean acidification.

My article this week came out of this months Pacific Fishing magazine. The article is titled “THE Tongass 77 campaign and why you should support it”. To sum up this article it states that a healthy salmon population comes from healthy fresh water streams. Currently in the Tongass Nation Forest there are only 12 designated areas with buffer zones to protect fish from logging. The Tongass 77 campaign is pushing for 77 designated areas to preserve and protect our salmon populations. Logging will still be allowed to continue , but 77 drainages will be protected from logging. This article really fits in great for this week I believe . To keep our fish sustainable we not only have to regulate our catch but preserve our forests. More information on the Tongass 77 can be found at www.americansalmonforecast.org

My article is from a peer review journal on the decline of herring stocks in the prince william sound region. In 1993 fish and game were estimating the pws herring biomass to be 121,000 metric tons. Only 27,000 metric tons arrived though. Fish and game acted by closing the fishery from 1994-1996. In the 1997-1998 fishery 3,698 – 4,536 metric tons were harvested. Since 1999 the fishery has been closed and plans to remain closed. Herring take 4 years to recriut to the population. No strong year class has recruited since the 1988 year class in 1991 and 1992.  The blame of this event is controversial. Scientists say the 1989 Exxon Valdez oil spill killed off the herring. Hydrocarbons left from the oil spill kill the eggs of the herring. Exxon blames a number of things from overfishing, poor nutrition, lack of food, too much competition with hatchery pink salmon, whale predation , low water temperature , and disease outbreak. 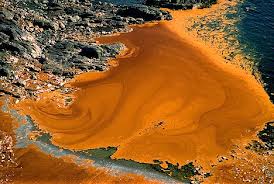 The Alaska pacific cod jig fishery is one of Alaska’s least mentioned fisheries. The fishery is an open fishery meaning you do not need a limited entry permit. I choose to talk about this fishery this week because it is a fishery I am just starting to participate in. The catch method for the jig fishery uses mechanical jigging machines that lower a mainline into the water just above the ocean floor holding 10-15 baited hooks and jigs the lures up and down. A vessel is allowed to carry up to 5 machines. The great thing about this fishery is it is inexpensive  to start out commercial fishing in. Each machine costs roughly $2000.00 all set up which is relatively inexpensive in the fishing world. One fisherman I met out of Kodiak was explaining to me that its like predator control near Kodiak. The pacific cod eat the juvenile halibut and crab. At only .40 cents a pound you need to catch a lot to make a living but its a great way to start out.  According to ADFG the 2012 limit for pacific cod jigging was 7.84 million pounds. The manufactures of the machines claim they reduce by catch of other fish and sea birds but I haven’t found any studies that support this. On a personal level though I’ve caught a few rockfish and one halibut, other than that just cod.

“The jig fishery, though relatively small, is a key fishery in the GOA, providing entry-level opportunity into area fisheries and contributes to a diversified fishing portfolio for combination fishing vessels throughout GOA coastal Alaskan communities. The Council has also exempted jig gear from the License Limitation Program (LLP) licensing requirements in the Western and Central GOA (Amendment 86, effective April 21, 2011) to potentially increase opportunities for jig vessels. ” (NOAA 2012)

There is not much information out there about this fishery besides regulations and statistics but a great way to learn more is to contact the Alaska Jig Association at  akjig.assn@gmail.com. When I first heard of this fishery it was through a man I met at the boat harbor and he showed me how to set up my boat and introduced me to the association. Theres a lot of great people there that can help you learn more and how to get started.

Here is an attached link to a video of how the machines work.

This article was found in  Pacific Fishing magazine in the February edition. This is great news for the Cook Inlet commercial fisherman , especially the set netters that got hit hard in the 2012 season with so many emergency closures . For the last 20 years the average sockeye harvest in Upper Cook Inlet has been 3.8 million. This year for the 2013 season Alaska Department of Fish and Game is estimating a harvest of 4.9 million. Hopefully this pans out well for the set netters and the chinook run is good this year because set netters suffered from their lowest harvest in 46 years last season. The Kenai RIver is a huge salmon fishery for both anglers and commercial fishermen and with most of the Upper Cook Inlet sockeyes running onto the Kenai River this could be a good year for both parties. 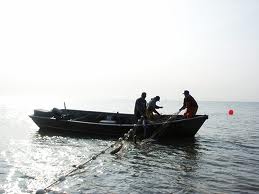 This article I found in the February  Pacific Fishing magazine written by Daniel Mintz. In Humbolt County’s Eel River Valley the chinook salmon are on the return. Once a river full of salmon has become a river scarce of chinooks. In 2012 as of Nov. 26, 3,070 chinook salmon passed by the fish ladder at Van Arsdale station. The station has been keeping records of fish counts since the 1950’s and this has been the largest run yet. The picture below is a picture of the stations fish ladder. 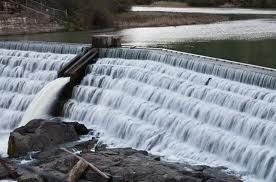 This was a really exciting article for me to read because I think its great to hear about a salmon population especially Kings to be increasing. I also think very highly of  Van Arsdale station for keeping records of fish populations since the 1950’s.

The link above is a youtube video involving geoducks 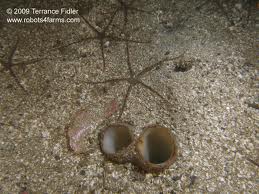 Hello I am the geoduck, my scientific name is Panopea generosa. I am also called the elephant trunk clam. 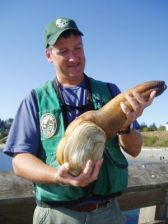 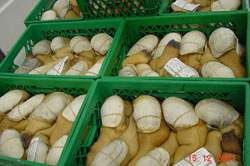 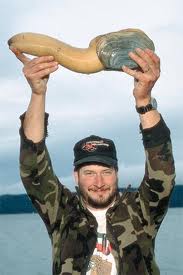 The difference between male and female geoducks are males mature at an earlier age and males are generally smaller than females.

Geoducks are broadcast spawners. That means when the timing is right the females release their eggs into the water column and the males release their sperm. Females carry millions and millions of eggs but only release one or tow million each spawning session. Geoducks reach maturity to spawn at age 3 and have been known to spawn at ages up to 107.Geoducks don’t seem to loose fecundity with age. Every year geoducks spawn and this occurs during the summer. In Alaska commercial fishing for geoducks is only open from October to May to allow the geoducks to spawn. Geoducks have low recruitment and scarce juveniles.

Geoducks feed on photo plankton and do not have many predators.

We can be found all the way from Newport Bay, California up to South East Alaska and Kodiak Island. Our heaviest concentration is in South East Alaska by Suemez Island, Backer Island, Lulu Island and Noyes Island.  We range from the  zero tidal mark to 100 meter depths. Geoducks to not migrate and stay in their area for life just moving to deeper and shallower water . We can be found buried up to 2 meters under the surface. Our favorite place to live is in fine substrates that are easy for us to burrow into. substrates such as sand, mud and gravel.

Our enemies our the star fish and sea otter mainly. Sea otters have been increasing in population in our area and are the main predator depleting our populations. Commercial fishing for us is only allowed by permit. Since we burrow so deep we can only be recreationally dug for during very low tides.

We are not very active, we stay burrowed underground most the time with just our siphon sticking out to feed.

We can reach up to ten pounds and the oldest geoduck found was 168 years old. We reach our maximum size around age 15. We are also the worlds largest burrowing clam.

Just last month in the Pacific Fishing magazine I read an article  about population predictions on herring in Alaska. Prince William sound will remain closed to fishing for herring due to the low numbers of fish stock since the 90’s. However,Bristol Bay, which produces Alaska’s largest herring by volume will see a substantial increase. In 2012 the fisheries quota was 21,652 tons and only 17,226 tons were caught. Fish and Game forecast the 2013 season to have a good run. The allowable catch for this season is 30,056 tons. Most of this herring will be sold to Japan, primarily for their roe