During a dry year, (2002) the Lower Klamath was the scene of one of the worst fish kills in
the history of the US. More than 30,000 salmon died 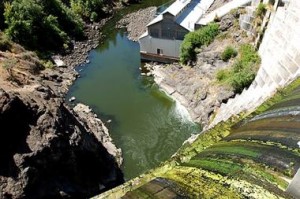 , trapped in warm, shallow
water as they tried to migrate upstream to spawn. A report issued by CDFG,
concludes that low flows, and problems with fish passage and high fish
densities which are related to low flows, had a direct impact on the fish kill.

Currently there are four dams located on the Klamath River in Northern California and Southern Oregon that are in the pre-planning stage of removal. If these dams are removed it will  be the largest dam-removal in California history and salmon
would gain 300+miles of historic spawning habitat. The environmental report estimates
an 81.4 percent increase in the post dam removal for the Chinook salmon run.
The federal government after a series of scientific reports, should have a determination by March, 2012, as to whether the benefits of the project will justify the costs.