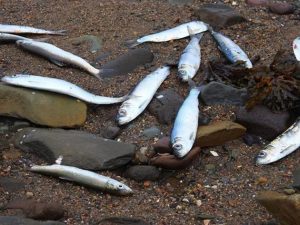 Nova Scotia has been left puzzled.   During the last week in November, scientists and local people are stunned.   Numerous dead fish had washed up on the shore.   No one seems to know why all the dead Herring.   Many scientists have considered what may have caused it.   Could it be Climate change, human related or just mother nature.

In the beginning, they did consider climate change since the waters in this area are warming up faster every year, but again only speculation on an idea.   Many tests had been done to see if anything by people caused the mass kill.   They were tested for chemicals, disease, viral/bacterial, contaminants or poor quality of the water. 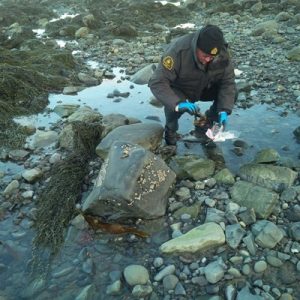 All the test came back negative.   No indication that man had anything to do with it.   Researchers then looked to the bottom of the sea floor.   There had been an earthquake in mid-December but again fish started showing up the last week in November. There was no signs of movement from fault lines, sulfide or emissions from pockmarks.   There was no evidence of mortality anywhere.

Still no answer has been determined.   Scientists and locals remained baffled.   They still have no answer on why such a large abundance of Herring washed up on shore.

One thought on “Massive Fish Kill News with fins #5”