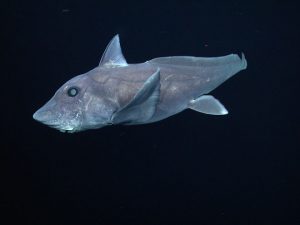 The Ghost shark is one of the craziest fish you will be lucky to view.   The deep sea living beauty looks like a shark but is actually considered part of the ratfish family.   This one above is called a pointy-nosed blue ratfish.   It’s given name is Hydrolagus trolli.   For most part they tend to live in the Southern Hemisphere 1 to 3 miles below the water’s surface.     The look of the ghost shark has a very unique look to it.   Honestly, it looks like it has no mouth but is completely stitched up.       They have sensory organs all over the body but especially in the mouth area.   This is used to sense movement and vibration in the water to locate food.   Another odd thing about the Ghost fish is the mating ritual.   The male has a sexual related organ on top of there head that helps position a female during mating. 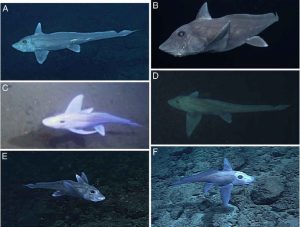 They are extremely rare for sightings starting in 2002.   Yet now they are being seen more, but not for the first time in the Northern Hemisphere.   Scientists are not saying anything about migration.       All scientific information says that the ratfish have been around from 350 to 375 million years ago.   From the first sighting there has been 19 new ratfish species uncovered.   Researchers say there are probably many more to come.