This week I got the chance to read an article on a study of Chinook salmon spawning and how this may also show us a better understanding of human and other animal reproductions. 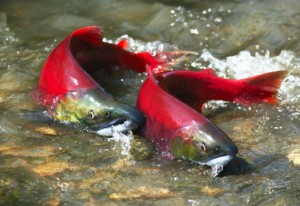 Researchers from New Zealand’s University of Otago where studying Chinook salmon that has shown evidence that “cryptic female choice’ (CFC) enhances fertilization success and embryo survival (University of Otago). Through this research they have found the cryptic female choice involves females using physical or chemical mechanisms to control which male fertilizes their eggs after mating, and is known to occur in a number of species. They found that ovarian fluid is being secreted with the eggs which can help or hinder sperm swiftness depending of the male it came from.

“The females OF give off a bigger boost to some male’s sperm and not others, these speedier sperm have a significantly higher chance of winning the race to fertilize eggs and the resulting offspring have a better chance to survive as embryos’ (University of Otago). So the good side of this is that the males that are more fit and are more likely to survive have sperm that reacts to the ovarian in a way that will speed up the sperm to beat out the weaker not as fit salmon’s sperm. This in turn will keep the salmon strong and weed out the weaklings. Survival of the fittest in other words.

With this we can see that interfering with a salmons natural spawning can make things more complicated. For an example that I used last week, a fish ladder was put into Anan near Wrangell Alaska that in turn made it easier for all salmon to run up the rapids of the river. With all the weak and strong salmon in the slower paced river after the rapids, the female’s choice is no more. All males now have a chance to fertilize a set of eggs, which in turn canceled out survival of the fittest and those fish that would have normally not survived or bred had the chance to breed and made a group of weak salmon eggs that did not survive. “Additionally, after assessing the genetic quality of the males we found embryo survival was linked to being sired by high quality fathers’ (University of Otago).