The devastation of this article is perhaps confusing to most people. The salmon are being left to starve because, of less herring-like alewife. The managers should have started from the bottom with rebuilding the lake trout, walleye, or lake herring. Lake Michigan is on the verge of alewife decline. 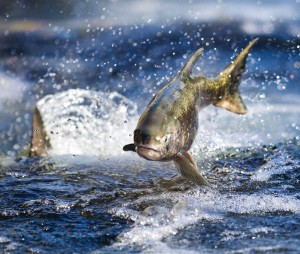 “These results serve as a reality check for those who continue to pressure the resource managers to stock Chinook salmon in Lake Huron,” said study co-author Sara Adlerstein-Gonzalez, a fishery scientist at U-M’s School of Natural Resources and Environment.

“The findings are also good news for native fish species and for the restoration of the entire Lake Huron ecosystem. Maybe we should celebrate the improvements in the native fish populations and try to adapt to this new situation.” 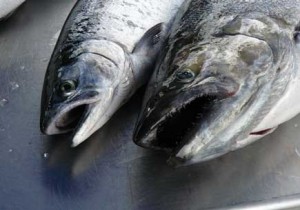 Recreational salmon were introduced into the great lakes around 50 years ago to help control alewives. From then on they became the main prey for salmon. Great lakes fishery is now worth $4 million per year. The alewife population started declining in 2003. Between 2002 and 2003 the alewife population plunged 90 percent.

“We are seeing all the same warning signs in lakes Michigan and Ontario,” Kao said. “We’re seeing decreasing nutrient loads, a decrease in soft-bodied, bottom-dwelling invertebrates due to the mussels, a decrease in rainbow smelt and, as a result, Chinook salmon feeding almost solely on alewives.”