This is an interesting article about crab fisheries in Alaska and how things may change in the future due to rising atmospheric CO2 levels and ocean acidification. 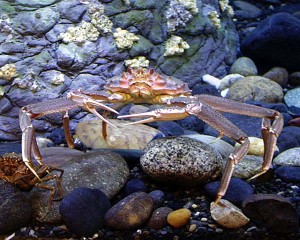 Alaska has many fisheries that are important to the United States seafood industry. Ocean acidification may have detrimental effects on the crab fisheries in Alaska due to rising atmospheric CO2 levels. New studies show that higher levels of acid in the ocean may alter the growth and mortality levels of Tanner, Blue King and Alaska Red King crab species. 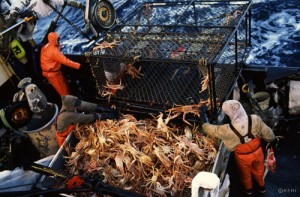 Chris Long of NOAA Fisheries Alaska Fisheries Science Center says that changes may be due to the stage of life the crab spends in higher acidic conditions. Studies have shown that some crabs that spend a time in more acidic conditions may have slower or weaker growth rates, higher mortality levels and are less able to tolerate change in pH levels. Another issue caused by ocean acidification is that young crabs are not able to retain calcium and thus their shells are not as strong. Having a weak or soft shell leaves these young crabs as an easier target for predators.

In 2013 NOAA Fisheries Alaska Fisheries Science Center announced findings that Tanner crab and Blue King crab could have developmental delays due to ocean acidification and since then research has been steady and new findings suggest a bleak outlook for the crab fisheries. Their projections are that in the next 40-50 years, there will be less crab to catch and more efforts to catch what is there. 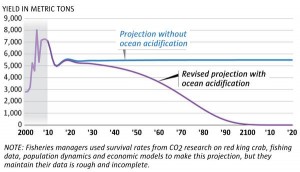 The next question scientists hope to answer is whether these species are likely to adapt to lower pH levels in the ocean. Some studies have shown that even in medium high acid conditions some Tanner crab larvae, embryo and juveniles have survived and even grew, suggesting that adaptation is possible. According to Chris Long, the longer some of these crabs were exposed to acidic conditions the more tolerant they became, and their ability to adapt would really depend on how fast pH conditions change. 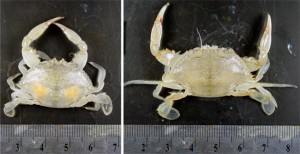