Starting this year in 2016, there is a new bill being talked about that gives the right to tax Alaska fisheries that unintentionally reel in specific types of fish a one percent tax on the value of Chinook salmon and halibut bycatch the person caught with trawl or longline gear in Alaska during the year. The bill is called House Bill 358 and is sponsored by Rep. Mark Neuman, R-Big Lake who will establish a fisheries bycatch tax.

Neuman said the main purpose of the bill is to generate conversation on the issue of bycatch. “This is to bring a little bit more attention to the issue. It’s been talked about by Alaskans for years, and how it affects our fisheries. My whole goal is to help reduce bycatch.’ (Neuman, 2015). 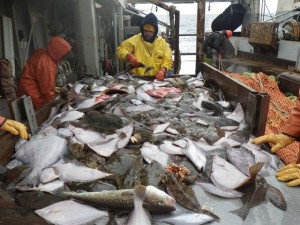 The one thing that this bill is trying to avoid is taxing the little guys and by this they mean people who are setnetters and so on. This tax is supposed to be focused on larger fisheries that deal with longlines, tralls and large nets. “Some of the bigger ocean processors’ (Neuman, 2016).

If people are catching to much bycatch in our state and making a profit from it why not tax them? “Why should they not pay a tax on resources they’re taking from Alaska’ (Neuman, 2016). These people that are catching and making money from this bycatch are more focused on the bycatch than the fish they are supposed to be catching, because they are not taxed on it like the rest of Alaska fisheries. They tend to make more money off the bycatch than the original quota fish.

This tax is going to hopefully stop fishermen from focusing on bycatch over the quota fish. Every other fishery in Alaska is taxed, so why not tax the bycatch as well? The money from this tax of bycatch could help towards keeping other fisheries up and going, including salmon fisheries, cod fisheries, halibut fisheries and so on. It’s a good idea all around in that it will stop over fishing of bycatch fish and the money will help out Alaska fisheries all around.

3 thoughts on “One way to try to reduce bycatch in Alaska: Tax it!”