This article has direct relations with an Atlantic cod fishery in the Gulf of Maine. In summary this article explains that warmer water temperatures have decreased cod stocks. Fishing quotas were based on historical data without considering the change in water temperatures and this lead to higher fishing quotas than are able to maintain sustainability. This brings to light the concept that past evidence ca not always be relied on for future predictions in population size and age without considering new evidence. 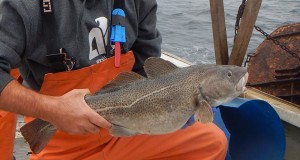 Researchers have reported that the Gulf of Maine has heated faster than most of the rest of the world’s oceans over the decade and reached peak warming in 2004—2012. Scientists believe that a Northward shift in Gulf Stream and a shift in weather patterns may be responsible for the rapid warming. The Atlantic cod fishery crashed in the 1990’s and the fishers have been under strict catch limits in attempts to revive the cod population but the fishery is still unable to sustain a healthy stock. Researchers have said that the Atlantic cod is mostly a cold water fish and the Gulf of Maine fishery is near the edge of the cods range, this coupled with warming temperatures could be good reasons this fishery is not doing well. Researchers believe that good fisheries management can save the fishery but the fish stock depends heavily on the temperature conditions.