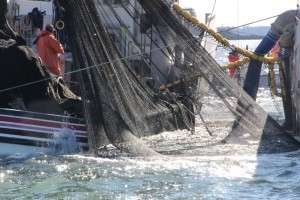 This year, the  sac-roe herring fishery in Sitka was uncharacteristically quiet.  Usually known for it’s  competitive nature, Sitka herring is one of Alaska’s most popular, shootout-style fisheries.  2015 was a different year for the fishery, because the fleet decided to harvest the allotted quota on a cooperative basis.

This was the first time the fleet has initiated a co-op since the mid-1990s.  There are two reasons that the commercial fishing fleet decided to operate in this manner in 2015.  First, the price per ton for sac-roe herring is expected to be well below average this year.  The price was close to $180 per ton last year, and expected to be much lower this year.  This is down significantly from recent years where the price was closer to $500 per ton.  The low price makes it very difficult for the entire fleet to arrive and fish on a competitive basis.

Another reason behind the cooperative decision was that the allotted quota is also relatively low in 2015.   The quota was only 8750 tons this year, which is almost half of what it has been in recent years.  This small quota, combined with a price drop, caused the commercial fishing fleet to agree to a cooperative style fishery.

A cooperative fishery means that every single vessel does not need to travel to Sitka and participate in the harvest.  Half of the boats did not participate this year.  Instead, a smaller number of vessels worked together to harvest the allotted quota, and the entire fleet will split the profits.  The total allowed harvest was completed in about a week.  Instead of the usual excitement and the crash-bang shootout that Alaskans are accustomed to watching, this year was definitely quiet and uneventful.

2 thoughts on “Sitka Herring a Cooperative Fishery in 2015”