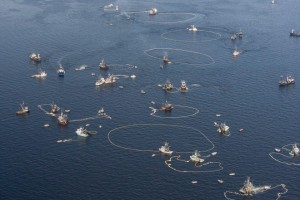 “By the 1950s, aerial photography of was becoming a valuable tool for the Fish and Wildlife Service, especially to spot salmon in Bristol Bay (Mondor).” These aircraft are operating between 600 and 800 feet in altitude, the observer who “counts ten individuals, mentally connects ten such groups to make a block of 100 fish, then divides the entire school into such blocks, tallying the individual hundreds on a hand-counter.”

The practice of using aircraft to locate fish for commercial fisherman in Alaska did not take off until the 1970s. The need for aircraft with spotters on board was due to the herring season being shortened and the availability of catching an abundant of herring were not promising. When using aircraft to find the school the commercial fisherman were more successful in achieving these large catches. 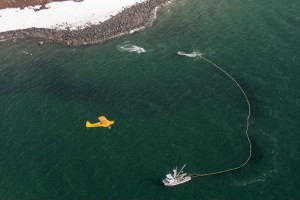 Many industries are starting to see an increase in drones and the fishing industries is no different. Earlier in March 2015 Alaska banned the use of drones for commercial salmon spotting and last year banned drones for hunting. “As the technology continues to evolve, the question of drone use for all commercial fishing will continue to come up (Mondor).”

One thought on “Fish Spotting in Alaska”