Origin: Native to parts of Africa and Asia. Was introduced to the United States in 2002 by fisherman and the fish market.

Impacts: Listed as injurious wildlife under federal Lacey Act, which makes it illegal to import, export , or transport between states without a permit. The snakehead fish is an invasive species that competes with native species of Maryland, Virginia, New York, Pennsylvania, and Arkansas. if fish is caught in Maryland or Virginia, people are instructed to kill it. 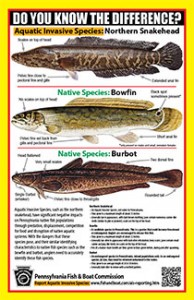 Trophic Status:  The snakehead is a predator that feeds on other fish species, frogs, and crustacean.

Appearance: It had an elongated body with a wicked snake-like skin pattern ( tan, dark brown and or black).  It has a long dorsal fin, a large mouth with sharp teeth, and can grow 33 inches long.  Young snakeheads are golden brown or pale gray.

Habitats:  The Northern Snakehead enjoys spending time living in ponds, lakes, streams, rivers and other freshwater areas. it likes to spend its  vacation time out of the water .  This normally last up to four days if It is kept hydrated/moist. It is  able to get away with being out of water because It can breathe air from the atmosphere using an air bladder that is similar to a pair of lungs. This poses a problem because these fish can move to other bodies of water and competing with native species. 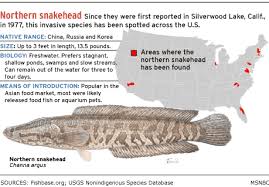 Reproductive Life cycle:  Females can  lay more than 15,000 eggs 1 to 5 times per year. Fish spawn in June-July. larvae nest is  gaurded by both male and female snakeheads.