The western North Atlantic Right Whale population is about 450 individual whales and is one of the most endangered whales to inhabit our coastal waters. There has been a small increase in the population size but the whales are still critically endangered. To help the population continue to increase on February 13, 2015 the NOAA fisheries proposed to expand the designated critical habitat for endangered North Atlantic Right Whales in the northwestern Atlantic Ocean, to include the areas were they calves and nurse the calves.

This proposal would expand the critical habitat to roughly 29,945 square nautical miles, and to include northeast feeding areas in the Gulf of Maine/Georges Bank region and calving grounds from southern North Carolina to northern Florida. If this critical habitat is approved it would require any federal agency that is conducting, funding, or permitting activities that may affect the areas to consult with NOAA Fisheries. The NOAA Fisheries will then make a determination on affect the actions of the agency would have on the habitat.

The areas proposed to be included in the northern critical habitats have physical and biological features that provide foraging areas for the whales’ prey. Tiny planktonic crustaceans are abundant to the areas and needed for the whales to thrive. The areas being proposed in the southern habitat includes physical features that support calving and nursing with optimal physical oceanographic features. 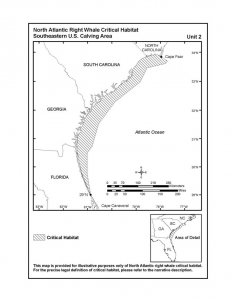