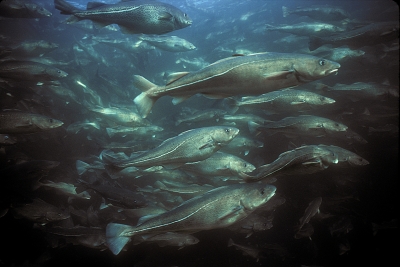 The centuries-old  infamous Atlantic cod fishery experienced a devastating collapse in the 1990’s due to unsustainable fishing practices as well as changing environmental conditions. It has been unclear if this fishery would be able to recover. Accourding to the World Wildlife Fund (WWF) website, 30,000 jobs were lost-a huge impact on Newfoundland’s economy. This was the single  largest mass layoff that Canada had ever experienced. WWF has been working with the Northwest Atlantic Fisheries Organization (NAFO) to develop better management strategies which include sustainable fishing practices. This effort has brought the fishery to the table for assessment by the Marine Stewardship Council (MSC). The MSC can certify or deny a fishery to be labeled as sustainable.

The World Wildlife Fund, known as WWF has put in to action a vigourous project to rebuild this area known as the Grand Banks. The project is called a Fisheries Improvement Plan and was officially started in 2011. WWF and NAFO have been working for years to close 18 areas to bottom fishing. The result, according to an article in Power Engineering, “was the outcome of the 2013 stock assessment by Fisheries and Oceans Canada showing a positive biomass trajectory for the next three years”. The Department of Fisheries and Oceans Canada  (DFO)  has extended the fishing season on the sounthern coast of Newfoundland into the spawning season for cod  through the end of March at the least. This is partly to the majority of the quota not being harvested, and interest in seeing what is produced at this time of year.

Although this all seems like great news, fisheries scientists remain cautious. The Atlantic cod are living longer and doing better than they have been in the last 20 years, yet their reproduction rate is still reportedly low, and they are still nowhere near where they should be, 90 per cent below levels measured in the 1980s. The work of WWF has been important to the recovery, although scientists also attribute some of this to the warming of the oceans having a positive effect on the fishery. Many remain skeptical that there will ever be a thriving commercial fishery again in Newfoundland. Many fisherman have left the areas, and fishing communites have drastically reduced in population.