It is now new news that the fish population of the world has been slowly depleting, even worse is that we do not know how to stop it. The Fish Management Officials have acted to the steady decline of fishery stocks with a plethora of regulations and rules. Many of those regulations are forcing fishing operators to be more selective in their harvest. This is done by thre different ways. First   is by targeting certain species and regional populations and not exactly paying attention to some less know species. Second is by mandating size or gender restrictions on catches for both commercial and sport fishermen. Third and last is by defining open and closed seasons for fishing based on a seasonal calendar. An example for those of you who are familiar with the fish in Alaska would be the heavy regulating of our native King Salmon. At first it would make sense that the only way to help the fish is to regulate it but does selective fishing have long term effects that should be more thought through. By targeting specific parts of the fishing waters for removal, regulations intended to preserve fish populations can instead push a delicate ecosystem out of balance. Posted below is an image of the Cod and how they’re average species is begininning to slowly get smaller as the years go by. Lead study author Shiji Zhao says, “Simply speaking, a balanced exploitation aims to maintain, to the extent possible, natural ecosystem structure to support sustainable fisheries and conserve biodiversity. His concept is to seek balance relationships both among different species and among subpopulations of a given species like age, gender groups or different schools. research shows that selectively targeting some sizes of a species can drive unwanted population shifts. That drastically reducing the number of males relative to females with selective fishing pertaining t gender. Setting a minimum catch size, applies selection pressure that may not normally favor smaller individuals, and that would drive down the size of the perticular species over long periods of time like the picture of the Cod. Another theory is that the establishment of legal fishing seasons can affect when salmon runs occur by selectively killing late or early fish.

Another concept of Selective Fishing is the by catch that happens when fishing trawlers catch fish other than their targeted species.   The big problem is that fish caught as by catch are usually not utilized, and because by catch is almost always unnavoidable we need to find a use for them if they are caught. Instead of continuing the way we are fishing it would make sense to be able to find a market for the fish caught as by catch. Even with some fish that you could not use as a food product for people can find some use, fish oil as well as feed for livestock or even for fish farms cultivating more desirable species are just a few ways that by catch can be utilized. 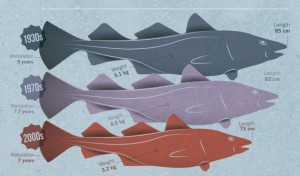 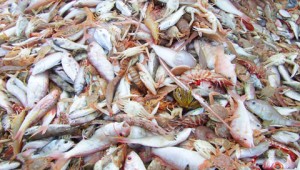