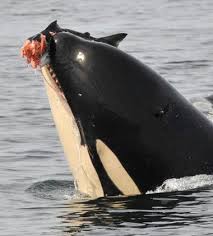 Commercial ocean fisheries on the west coast that target Chinook salmon may someday compete with the killer whales.  Orca whales that  share the marine environment with Chinook salmon  seem to prefer the same fatty Chinook that fisherman are targeting.    Approximately 80 percent of the killer whales’ diet in this area  consists of Chinook salmon.  The population of Orcas is low, only 89 are estimated  in the total population for this area according to NOAA’s researchers, and the Chinook populations are also reportedly  at risk.  Scientists have been doing genetic testing on the Chinook DNA which can determine which river they will be migrating to spawn and therefore what the  Orca’s are feasting upon to determine which stocks are the primary target for these killer whales.  They are finding  that the vast majority of the Chinook that these whales prefer are destined to migrate up Canada’s Fraser River to spawn.

This is where the management of the Chinook fishery comes into play. The current management plan for the Puget Sound lists the impact on killer whales to be “non-jeopardizing”. This is considered a biological opinion. With new information on the diet of these marine mammals, this opinion could change. Orca’s are endangered. Chinook are at risk. The data is not sufficient at this time to warrant management actions restricting fishing on the Chinook yet, however this is bringing to light that there is a possibility that managers could restrict fishing in the future on Chinook if harvest is found to affect and limit an important food source to this marine mammal population. As for commercial trollers, they could even potentially be shut down completely.

More research is needed to be sure exactly how much fishing is affecting the whales. Part of this research is determining if restricting or closing this fishery would actually benefit the killer whale population. In addition to whale consumption of Chinook,  there are also other predators that eat Chinook salmon aside from human harvest. If fishing were stopped altogether, how much of the excess Chinook left in the marine environment would the Orca’s have access to? At this time there appears to be no clear answer.

One thought on “Orca’s, Fisherman, and Chinook Salmon”