My common name is Burbot, Sceintist call me Lota Lota. I go by alot of names like lushfish, lobster fish, and some call me   a link.

Sexual tendency:   As broadcast spawners, burbot do not have an explicit nesting site, but rather release eggs and sperm into the water column to drift and settle. When spawning, many male burbot will gather around one or two females, forming a spawning ball. Writhing in the open water, males and females will simultaneous release sperm and eggs.

Eating Habits: As adults, burbot are primarily piscivoir, preying on Lamprey, whitefish and grayling, young northern pike, sucker and trout also are part of its diet.

Habitat: Freshwater lakes and rivers. usually found in colder climates. Burbot like slow water so any deep pool in a river or lake they are happy.

Primary activities: the snakelike body makes it hardto move around in fast currents so they like slow water. They act like catfish in that they build burrows under the water.

Interests: they are not a very active fish, and sometimes they move around in large schools. They can also grow to be over forty years old!!!

Random facts:. In finland, its roe is sold as caviar. The skin of the fish is very tough like a catfish and the meat is of very high quality despite its ugly countenance, it is sometime called Poor mans Lobster because of how delicate the meat is. I consider it some of the best fish i have ever eaten. 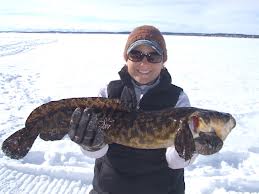 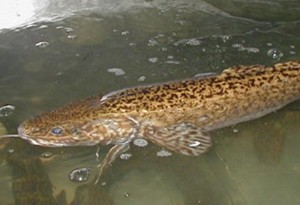 One thought on “They call me Burbot”