The Modoc sucker (Catostomus microps) is a rare fish that inhabits small tributaries in northeastern California and south-central Oregon, more specifically the Pit River drainage in the high desert country of Modoc and Lassen counties in California, and the Goose Lake subbasin in Lake County in Oregon (see map below). They are a small sucker averaging between 3 to 6 inches with a maximum of 11 inches in length.  In 1985, this fish was listed officially as an endangered species due to loss of habitat with a total population thought to be approximately 1,300 fish. Presently, 20 years later, the U.S. Fish and Wildlife Service (USFWS) has proposed to have it removed from the list.

Apparently there are more Modoc suckers than previously thought by federal biologists. USFWS had documented their realized niche, the space they actually occupied, in only 12.9 miles of streams which has increased to 42.5 miles of stream habitat. Their preferred habitat consists of fine silt to small gravel within streambeds where they prefer to be near vegetation, roots, and overhanging branches.

Their diet consists of algae, invertebrates and organic matter which is greatly affected by erosion. Cattle grazing and particularly watering can cause erosion which damage the Modoc’s habitat. The growth in numbers and area is thought to be in part due to forest management which provided and increased fundamental niche or potential area that could be inhabited by these fish. The management strategy involved reducing run-off from roads, and moving cattle to other watering locations including the use of cattle exclusion fences. In addition to forest management practices, a group called the Lake County Umbrella Watershed Council has been working with private landowners in the area to install fish passages which reportedly allow for year-round migration.

The proposal to remove the Modoc sucker from the endangered species list is open for public commentary. According to the federal proposal:

“…We are seeking information and
comments from the public regarding 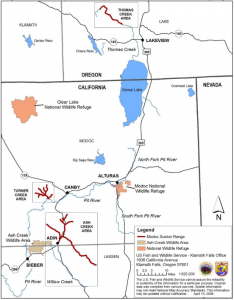 this 12-month finding and proposed
rule. In addition to the proposed rule,
we are also seeking information and
comments on the draft post-delisting
monitoring plan.
DATES
:
We will accept comments
received or postmarked on or before