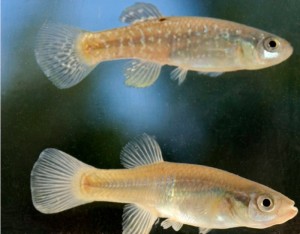 This article was about how Atlantic Killifish have adapted biochemically to living in a toxic habitat, specifically that of New Bedford Harbor in Massachusetts. Woods Hole Oceanographic Institute biologist and paper coauthor says about these findings: “It’s an example of how some populations are able to adapt to changes in their environment–a snapshot of evolution at work.’

Researchers have found, through two separate studies of the fish in and around New Bedford, that the Killifishes’ unique tolerance to pollution is due to changes–mutations?–in a receptor protein called AHR2. AHR2 controls the breakdown and processing of certain pollutants in the fish’s body–in this case heavy metals and Polychlorinated Biphenyls (PCB’s). Toxicity can occur when the contaminants that don’t get completely broken down continue to stimulate the AHR2 protein. This overstimulation does not occur in the New Bedford Killifish because, as Marc Hahn says, “The killifish have managed to shut down the pathway.’

Scientists theorize that this change in AHR2 protein occurred because of the killifishes constant exposure to the contaminated soil of the New Bedford Harbor. Killifish don’t migrate. “They live their whole lives in the same area, generally within a few hundred yards o

f the spot where they were hatched…the killifish are there year round and spend winters burrowing into the contaminated sediment.’

While at first discovery the adaptations of the killifish might seem advantageous for their current survival, they might not be great for their long-term fitness. “Despite their healthy appearance, there could be unknown negative costs for the New Bedford Harbor killifish associated with the resistance to PCBs. Researchers will look at whether the adaptation affects how the killifish are able to respond to other kinds of stressors in their environment, such as low oxygen levels.’ Also, the question of raised as to what would happen if and when the harbor were to be cleaned up. Would this mutation suddenly become disadvantageous for the killifish? Another consideration is how these contaminants will affect the organisms that eat the killifish–organisms that don’t have the same pollution-protecting genes. These organisms include fish such as bluefish and striped bass–fish that are both commonly eaten by humans.