The King salmon, also called the Chinook salmon is the largest type of salmon in the ocean. Historically, the native species of Chinook salmon ranged from all the way down to California and north to Alaska. Elsewhere, distribution is patchy, but occurs from northern Japan in the south to the Arctic Ocean and some parts of Russia.   Their populations have disappeared from large areas where they used to be many, shrinking by as much as 40 percent.In North America, their inland range has been cut off, mainly by dams and habitat alterations. A study commissioned by the U.S. Fish and Wildlife Service on a small river in north Alaska, estimated 75,000 smolts left that one little stream in 2011. If Alaska was witnessing the sort of ocean survival seen back in the 1990s, about 4,500 of those smolts would be expected to return as adults. State fisheries biologists figure they need a minimum of 3,800 spawners to seed the river that was being studied. A return of 4,500 would provide about 700 fish for anglers. A return of 8,000 and anglers would be in fat city. But 8,000 doesn’t seem likely. The river closed to fishing almost as soon as it opened this year. Only 3,455 kings reached the river’s spawning grounds in 2009. The next year was better with 4,417, but there were only 3,547 last year despite the early closure of the stream to all fishing. Instead of a 6 or 7 percent return adults to smolts, there was a return of less than 5 percent. This year could be worse. So the big question is what happened to all the salmon? Back when people first started making an attempt to help the salmon returns, there were bounties on Dolly Varden char and eagles because both were known to eat salmon. And fishermen were encouraged to shoot bears and seals, two well-known salmon predators. Eventually, scientists concluded that none of these wild predators were really killing enough salmon to make a difference at the population level. So the bounties came to an end . One theory is that the bycatch of fishing trawlers hunting out other fish but also cathing salmon are responsible. Many state officials were angry when the bycatch of kings hit a peak of 122,000 in the Bering Sea in 2007. After numerous complaints the government soon bowed to public pressure to do something. Trawlers were in 2009 put under a bycatch cap of 60,000 kings in the Bering Sea. They are required to quit fishing if that cap is reached. The problem is that the only way to report what the bycatch acutually is is by asking the captains and the crews for a count of the Kings they accidentally catch. So when they have the chance of their fishing season getting cut short they tend to not be so truthful. some of the crewmembers interveiwed about the goings on for the fishing trawlers say that only thirty percent of Kings caught are reported. In high hopes we will soon once again see an abundance of Kings, there have been reports clear back into the 1800’s about shortages in salmon, so the recent lack thereof has a chance of making a comeback. 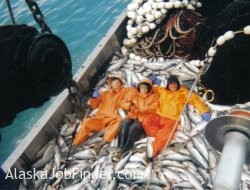 One thought on “Where in the heck are the Kings?”