The New England fishery for the Gulf of Maine shrimp is closing down for the first time in 35 years. Opinions of fishermen and local business owners are somewhat divided. Some believe that the shrimp are still around, they just need the chance to find them, while others recognize that the dramatically decreasing catch sizes could signal a decline in the population.
In the 2012 season fishermen brought in 2,185 metric tons of shrimp. This number dropped to under 300 metric tons for 2013 season. Scientists are speculating that the warming waters are stressing the shrimp populations and causing them to either decline or to migrate to colder waters.
With the all time low catch the managers are forced to close the fishery until further studies can be completed, while the New England fishermen are forced to board up their boats and hope for a cold winter. 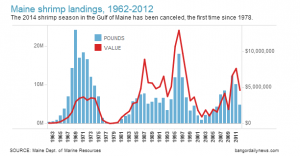