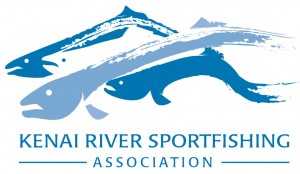 The Kenai River king salmon are the largest salmon in the world,  drawing worldwide interest  of all sport fishers. In recent news the conservation and fishery management regulations have been called in to  question discussing whether or not they are allowing overfishing of these world record fish.  The Kenai River Sportfishing Association (KRSA) released their concerns on the “hard times with historic low returns” of these king salmon. 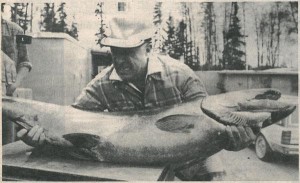 Les Anderson’s who was entered into the Alaska Sport’s Hall of Fame after catching a 97.3lb world record Kenai River king salmon.

The Alaska Department of Fish and Game (ADFG) has already set preseason restrictions and closures because there is a low king salmon abundance.

In reaction to these new restrictions the  Kenai River Sportfishing Association (KRSA) spoke out about the  principles  fishery  management  are not being met, and that “Human history shows our nature wanting to test the line between fishing and overfishing – and far too often we roll the dice in favor of short-term profits only to see another fish stock run aground.” –  Ricky Gease, Executive Director of Kenai River Sportfishing Association (KRSA).

The problem that the KRSA is seeing with the current fishery management is the lack of conservation of the King Salmon – They recently have made it public their views on the management conducted by  former Alaska Board of Fisheries (BOF) member Vince Webster.

“Our concerns regarding Webster’s confirmation spotlighted the fact that basic principles of fishery management were not being followed. These included his failed leadership to provide adequate board oversight regarding an alarmingly low new interim escapement goal for Kenai kings, which drops by one third the minimum number of king spawners from 18,000 to 12,000 (Didson sonar counts); his advocacy to set an optimum escapement goal even lower than the new minimum so that commercial set netters could keep on fishing; and, his failed attempt to shift the burden of king conservation solely onto one user group, the personal use fishery, when no other group faced restrictions. These and other similar past actions added to the foundation and argument that he should no longer serve on the board.”

They also direct blame towards the  Alaska Department of Fish and Game (ADFG) stating,

“It rushed a new interim escapement goal for Kenai kings at a strikingly low escapement level without adequate peer review. Contrary to professional and standard department protocols, ADFG lowered the new range so much so that two-thirds of the new goal has no escapement data to support it”

This was an extremely interesting article to read, I feel that it was very bias in the sense that they directly placed blame on a certain person and department. I think that instead of specifically placing blame they could have discussed the problems they think are  occurring  with the low return of the king salmon and what could be fixed to increase king salmon abundance and decrease overfishing. I do agree that if they are seeing problems with the return of the king salmon and overfishing they should be addressed accordingly.