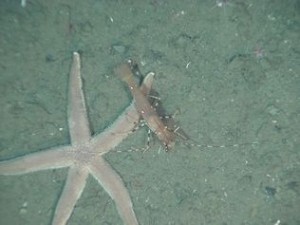 In Everett, Washington a ban was put on commercial shrimp fishing in Puget Sound.   This ban was put in place to boost sport fishing in the more urban areas of the state.   One commercial shrimp fisherman in particular will be affected greatly, along with his customers.   His name is Kevin Nihart, and he used commercial fishing off of the shores of Puget Sound to make a living.   When the reporter had talked to Kevin he said that he felt bad for his customers and that he wouldn’t be able to go out into the straight to fish for shrimp because he cannot afford to drive his boat all the way out there and truck his shrimp back to the Everett market that he always sells his shrimp at.   I have sympathy for this man and his customers.   It is a real bummer when you have that favorite food or thing that you want but only one special person has that and then it is no longer there.   I feel like the reasoning behind the ban isn’t exactly the best, promoting sport fishing does not seem quite as important as the customers who enjoy buying shrimp from the same guy because it is fresh and easy.   I think that it is more important to support that a local man harvested those shrimp himself instead of a large vessel or company running it.   It is sad that this man will not be able to harvest and sell his shrimp to his loyal customers next year at the market so that the state could promote sport fishing when I am sure this man’s harvesting of shrimp did not affect the sport fishing in the urban areas of the state.