A Chinese engineer, Zhang Wuyi, and his team have designed an unmanned submarine with the intention of using it for fishing in deep waters.   It has initially been used for harvesting sea cucumbers, a dangerous line of work for humans.   However, it will probably expand to other forms of fishing because it has the ability to pull in all types of fish: “It’s like an automatically controlled undersea harvesting machine, and absorbs aquatic products like a vacuum cleaner,” says Zhang. This efficient machine enables the production rate to be much higher than when men fish.   Last year, he sold his first submarine to a sea cucumber plant operator.   It has performed well, diving up to 30 meters and catching sea cucumbers for 10 hours continuously.

Zhang and his team demonstrated the capabilities of their submarine in a pool environment. An engineer was at the controls in the operating room while the submarine performed its mission in the nearby pool: it floated, submerged, moved slowly forward and backward, and collected sea cucumbers with its underwater camera and robot arms. Zhang claims that with the camera, lighting system, robot arms and the positioning system, the submarine can fish accurately. 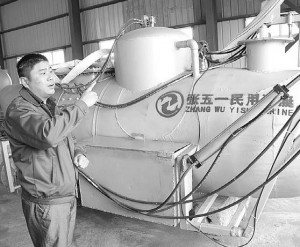 My concern is that with a machine like that, how do we prevent an extreme level of overfishing? We saw last week that the Chinese are already vastly underreporting their fish imports and catches.   If this submarine performs as well as Zhang claims, the Chinese will use their infinite capacity to build thousands of these machines and send them all over their coast to harvest sea cucumbers. However, they will not stop there — they will also send them all over the world, to harvest any fish possible. I am envisioning a vast fleet of fishing submarines with “mother ships’ above controlling them and collecting their “loot.’ And no one will be able to stop them…

One thought on “Submarine maker wants to replace humans who fish”