I could not help but post this article when I read it this morning – in a nutshell, in 2011, the Chinese reported that they took in 368,000 tons of fish a year when, through slick detective work, it has been discovered that they truly took in 4.6 million (12 times as much as they reported!).   For the most part, this effects West Africa but read below and attached article for details.

It looks like rare earth elements aren’t the only commodity China has been allegedly keeping to itself. According to a recent study published in the journal Fish and Fisheries, the Chinese have been drastically under-reporting the number of fish that Chinese ships catch in other countries’ waters every year.

While China tells the UNFAO, the U.N. agency that tracks global fishing data, that Chinese distant-water fishing vessels take in roughly 368,000 tons of fish a year, the Fish and Fisheries report estimates that the actual weight of the collective catch is more than 12 times that number — around 4.6 million tons a year. At the same time, China exaggerates its domestic catch.

The report claims that the majority of the haul (64 percent) comes from off the coast of West Africa, where Chinese fishing practices could have a serious impact on the local population. “The study shows the extent of the looting of Africa, where so many people depend on seafood for basic protein,” Daniel Pauly, a professor at the University of British Columbia and one of the authors of the study, told the Guardian. “We need to know how many fish have been taken from the ocean in order to figure out what we can catch in the future. Countries need to realize the importance of accurately recording and reporting their catches and step up to the plate, or there will be no fish left for our children.”

It’s important to note that just because the fishing goes unreported doesn’t mean it’s illegal. The Chinese government may have negotiated special (and usually secret) agreements with certain African coastal states allowing Chinese vessels to fish in the waters.

It’s also true that the Chinese are not alone in exploiting West Africa’s abundant fishing grounds. But, if these estimates are correct, Chinese fishermen are doing it on a much larger scale than anyone else, catching as much as 22 West African coastal countries and the other 38 countries fishing in the region combined. The long-term consequences for food security could be quite severe. 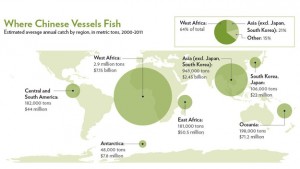 One thought on “China is drastically under-reporting overfishing”