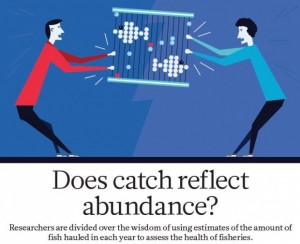 Overview : The article consists of the argument that you cannot effectively estimate the health of fisheries solely based on the estimate of how many fish are hauled in each year. It’s part of a “point/counterpoint” commentary between Ray Hilborn & Trevor Branch of the University of Washington and countered by Daniel Pauly of the  University  of British Columbia.

I think that both arguments have some valid points, I think that the catch data being used by some fisheries might give somewhat of a skew on numbers but it doesn’t mean  that it is a completely flawed system. I think that the stock assessments might be a more “innovated” method to measure the health of the fisheries, but later on in the article they discuss if catch data is all you have to go on that it is still effective if the researchers use it tentatively. I don’t know enough about either method to give a strong opinion but based on what I have read from the article I think that from the information given by Ray Hilborn and Trevor Branch that catch data is only accurate 1/3 of the time stock assessment would be the better method to assess the health of a fisheries, but because of the high cost I think that if you could innovate catch data to be a more accurate method to measure it then it’d make more sense to do that in the future.