Since we had recently discussed shark finning in class I decided to look up some news reports on it.  I had never heard much or known much about shark finning before this class, and I found a very interesting news article that was posted recently about shark fisheries.  The article discusses the importance of sharks within the ecosystem and that a change in the amount of sharks present in an ecosystem can affect it all the way down to even marine plants.  Shark finning is popular and shark fins are in high demand now, causing more and more sharks to be killed in the process.  The article said that 1 in 15 sharks are killed.  When I read that I thought to myself “Wow! I never knew sharks were so high in demand, and 1/15 is a lot of sharks!”.  The main reason this is so tragic, and this amount of sharks killed is such a serious issue is because of the rate at which sharks mature and grow.  Sharks are much like humans, whales, and such-like animals and they mature slowly and produce minimal offspring.  Basically the shark population cannot reproduce fast enough to keep up with the amount that the sharks are being exploited.  There have been previous regulations set for certain shark species and the harvest of such species, but we will need more than just that to save sharks and the ecosystems in which they live.  “Based on data collected for the latest study, shark deaths were estimated at 100 million in 2000 and 97 million in 2010. The total possible range of mortality is between 63 and 273 million annually.”- Straight from the article.  I think this is one of the most important parts of the article because it really makes the reader think about how many sharks are actually being killed each year.  This is a serious issue that most people don’t hear anything about, so I hope the word is spread soon! 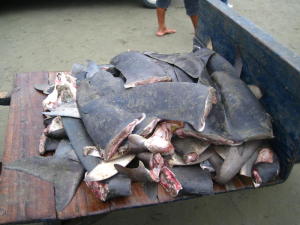