Due to atypical water temperatures off the East Coast of the US this past year (since winter through fall), there was a  high number of catches this year (~30% higher than last year). Essentially, when water does not get cold enough, lobsters do not have a dormant winter state.   In these warmer waters (some as high as 60 degrees F) they do three things they don’t usually do: 1) molt early and more often, 2) breed more and 3) move around and thus stumble into lobster pots.   This leads to an overabundance of lobster caught, 18 million pounds more this year than last year’s 123 million.

As a result, lobster prices have plummeted to as low as $3.00/lb (compare to 2011 when it was as high as $6.50/lb). Don’t be fooled that you can actually buy lobster for that price — it is only the price of what a lobsterman is receiving for his catch. The consumer is not seeing a dip in prices of the end product.   We are still paying $10.00/lb for a lobster in Washington, DC and transportation costs cannot account for that much of a difference… 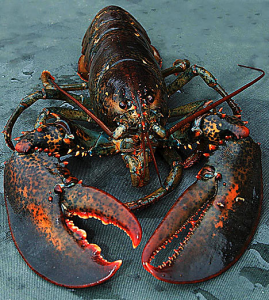 Compounding the economic problem are the following:

1) Even running 24 hours a day, the factories do not have the capacity to process all of the large volume of lobster.

2) The global economic downturn has decreased the number of clients, especially from Europe, traditionally a high region consumer.

3) Unless the lobstermen themselves curb their catch quantity, there are expectations that the price will continue to be depressed.

The glass half full side of this story is that strong conservation efforts by the Maine Lobstermen have also contributed to the high numbers of lobster, so good that they are in the process of being Marine Stewardship Council (MSC) cerified.

Meanwhile, further south on continent, there is an opposite concern.   The Central American Integration System (SICA) put in place a ban on fishing spiny lobster from March 1 to June 30, its prime reproductive period. The ban covers water off the coast of the entire Caribbean coastline, including Belize, Guatemala, Honduras, Nicaragua, Costa Rica and Panama.

Though the penalties are severe, some are pessimisitic that some of these government authorities would be able to enforce this regulation, reinforcing the mindset that good governance is the key to sustainable.