Chinook Salmon, the largest salmon of the salmon species and to some the most valuable, is listed as endangered in Washington more specifically the Columbia River, and also endangered in California’s Sacramento River.   It is listed as threatened across the rest of the Pacific Northwest.   Although Alaska’s Chinook salmon stocks remain relatively healthy, their numbers are still declining. 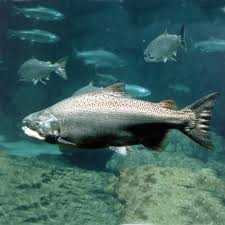 Harvests in Alaska have significantly reduced over the past 18 years in average catches. From 1994 to 2005, to 2006 thru 2011 subsistence fishing seen a 7% decline in harvest, commercial fishing seen a 40% reduction, and sport fishing has reduced about 12%.

In 2010 the Gulf of Alaska polluck fishery fleet caught nearly 55,000 Chinook Salmon bycatch, the highest ever recorded (these numbers were gathered by observers, then only observing on the polluck fishing boats that were over 60 ft in length).

Since then additional measures have been made to gather more accurate numbers of Chinook Salmon bycatch by implementing an observer program (NOAA’s Observer Declare and Deploy System) for all groundfish trawl vessels in the Western Gulf of Alaska, including vessels under 60 ft. in length .   15-20% of the fleet is required to carry an observer who stays with the vessel until their catch is delivered to the processor, at which time, the observer counts and documents each fish caught that is not the target species.   This number is then averaged and applied to the rest of fleet.   The formula for the Chinook Salmon bycatch numbers in the Western Gulf is a weighted average formula, and applies to vessels that are fishing the same area (*Western GOA 610 is one area that extends over roughly 600 miles from about Sand Point, AK to Adak, AK), same target species, using the same gear type, and fishing in the same 3 week period. Chinook salmon bycatch has been an ongoing topic of concern for the North Pacific Fisheries Management Council and alternative measures are continually being analyzed, and changes and revisions to current policies and regulations for these fisheries are frequently being considered. 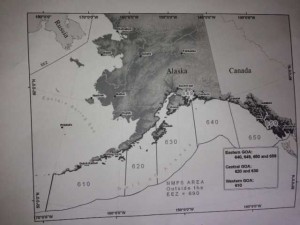 I agree with the goals that these regulations and observer systems have, however, I feel that a more accurate formula could be developed.   For instance: with this formula a vessel fishing in the   Dutch Harbor area that catches any amount of Chinook bycatch, that number gets   gets applied and averaged to the rest of fleet that may be fishing hundreds of miles away, like for instance in the Sand Point area.   A more accurate formula should be developed because the area thats being averaged is so large and over such a long time period. I think this would provide a more accurate count of what is really being caught.

Lawsuits have been filed challenging the federal governments newly implemented observer program calling it “substantial and unnecessary,’ and also having a negative impact on small commercial fishing communities and economies, “while it recognizes the importance of gathering at-sea data, NMFS has constructed an observer program that ignores the limitations of small boats and the data needs of specific fisheries.’

Something that is also scarcely talked about when it comes to Chinook Salmon stocks is the possible changes and damage to their spawning habitats, which may have contributed to the decline in these stocks.     Things like construction, bank erosion, heavy rainfalls or large storms, and pollution that can harm the spawning grounds of the Chinook. However, in October of 2012, the Alaska Department of Fish and Game published a Draft Gap Analysis of of the Alaska Chinook Salmon Knowledge Gaps and Needs, wherein the research team suggests that a stock assessment program be implemented.     They recommended a stock assessment   that would include escapement estimations, forecasts for returns, and more comprehensive studies and estimations regarding smolt and brood, and the gathering of more adequate local traditional knowledge concerning patterns and trends of stocks.   I haven’t been able to determine if any of these recommendations have yet been implemented.

3 thoughts on “Chinook Salmon Bycatch – an ongoing problem for all”