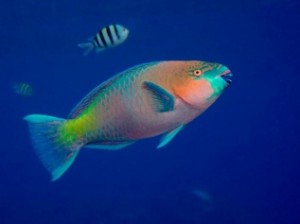 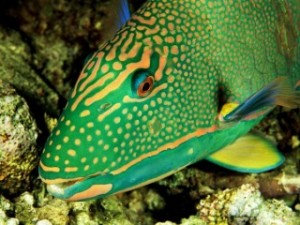 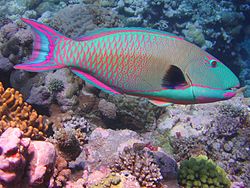 Differences between males and females: Almost all species are sequential hermaphrodites, starting as females (known as the initial phase) and then changing into males (the terminal phase). In some species, the males have a harem of females that congregate around them. Once the male dies or gets chased off, one of the females will change into a male and become the new dominate male. In most species, the initial phase is dull red, brown or grey, while the terminal phase varies from vividly green or blue with bright pink or yellow patches. The remarkably different terminal and initial phases were first described as separate species. There are also some species where the phases appear similar in physical appearance.

Reproductive mode: Parrotfish are pelagic spawners, they release many small buoyant eggs, which become part of the plankton. The eggs float freely, settling into the coral until hatching.

Where on the globe can you find it? The Parrot fish can be found all around the Caribbean in the topical coral reefs.

What kind of habitat does it like? Tropical Coral Reefs

Does it change habitat over its life history? Parrotfish tend to stay near the same Reef if was hatched at but some do stray to neighboring reefs throughout their life time.

How does it eat? They are considered to be herbivores because parrotfish eat a wide variety of reef organisms such as Coral (polyps) and coralline algae. By eating the coral, parrotfish can help prevent algae from growing wildly and choking the coral. Their teeth grow continuously; replacing the material worn away by breaking off chunks of coral and feeding. The teeth grind up the coral and coralline algae and ingest bits of rock during the feeding process. Their feeding activity is important for the production and distribution of coral sands in the reef environments.  After they digest the rock, they excrete it as sand which helps to create small islands and the sandy beaches of the Caribbean.

Does it migrate? The Parrotfish does not migrate, and it rarely moves far from the protection of the reef where it lives and feeds.

Enemies: The Parrot fish is not a particularly small fish most of its life but it is small enough to be a meal for one of the many predacious fish that live in reef environments.   One such predator of the parrot fish is the Moray Eel because they are extremely aggressive, defiantly and enemy.

Friends: The parrotfish is an omnivore, but it does not make a habit of eating smaller organisms. Parrotfish tend to be docile in most cases unless protecting a harem. The only known symbiotic relationship the parrotfish has is with the coral that it eats. The parrotfish helps clear the algae from the coral which allows the coral to continue to grow without being overrun.

Is it typically active or lethargic? Active

Behaviors: They form very large schools of around 40 that can be found moving about in the water. The smaller fish are on the inside of the school with the larger ones around the parameter. The males are dominant and they will have the females fighting over being around them in the school at various times. The males often challenge each other for overall dominance of the school.

One parrotfish can produce 90 kilograms (200  lb) of sand each year.

At night, the parrotfish secretes a mucus that covers the entirety of its body.   This allows the fish to attach to rocks or coral for protection. The mucus blocks the scent of the fish from attracting predators as well as prevents parasites from using this particular fish as a host.