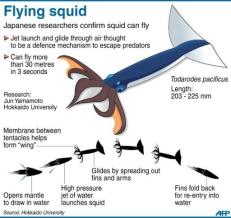 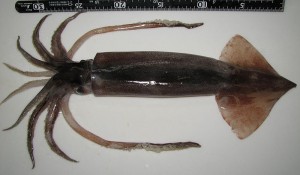 The evolution of squid has enabled them to discern danger quickly (largely due to their eyesight being catlike).  Besides the normal squid ability to change colors and/or propel swiftly through the water in response to predators, the Japanese Flying Squid’s jet propulsion and fin capabilities allow it to launch itself out of the water and fly very long distance.  It also has developed the ability to close its fins upon reentering the water resulting in a graceful descent.  Unfortunately, it is believed, the flight through the air might then expose the Flying Squid to other possible predators such as birds.

The name itself, the Flying Squid, clearly indicates human awareness of the ability to fly. The range of it’s spectacular flying abilities was only recently documented by Hokkaido University researchers though: its flight measures at 37 feet per second while maintaining flight for 98 feet!

One thought on “Week 4 Blog”