Sometimes, amidst all the turmoil, nature shows a glimmer of good news.

The Great Lakes, an important freshwater habitat for many species of fish, were already in the news due to their plight with the Asian carp, an invading species threatening to decimate the ecosystem. Now, the Great Lakes face a new invader, but my, how the tables have turned.  Hemimysis anomala, or also known as the bloody red shrimp, have begun to encroach on the Lakes; and, according to the fish natural to the lakes, they’re mighty tasty. 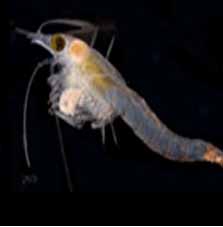 The shrimp, normally found in the Black or Caspian Sea, are suspected to have entered Lake Michigan first on a transoceanic ship, and have since spread to all the lakes except for Lake Superior. The initial presence of the blood red shrimp prompted some concerns over whether the ecosystem in the lakes would be damaged by the introduction of this new species. A 2011 study found that native fish species in the Lakes included the shrimp in their diets over a certain seasonal period, as shown by stomach analyses and the carbon and nitrogen signatures of the muscles tissues of fish like round goby, yellow perch and alewife.  While the full effect of the introduction of the bloody red shrimp is still in question, the immediate incorporation of these shrimp into the ecosystem and diets of native fish gives a little relief.

Not everyone’s diet is going so well, however. The oceans are warming, and whether you believe this is due to human or natural causes, the effects are becoming more and more evident. A study conducted by the University of Leicester found that marine fish infected with worm parasites respond to the rising temperatures in a dramatic way. While the warm temperatures can lead to a smaller overall fish size and decreased growth rate, those same warm temperatures actually aid the parasites to grow larger and faster, affecting their hosts’ physical and behavioral patterns. 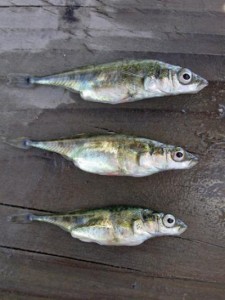 In addition to the typical swollen body that results from a larger parasite in a smaller fish, the study found evidence that the parasite may even manipulate its host’s behaviors. Among the fish observed, those with the larger and more matured parasites actually preferred the warmer waters, compared to fish of the same species with less developed parasites. The infected stickleback in particular only required a 5 degree change to influence these changes (15 degrees Celsius to 20 degrees Celsius). Researchers predicted that these behavioral changes could impact reproduction patterns, and possibly threaten populations in the near future with rising temperatures. In addition, the fully-grown parasites were large enough to infect fish-eating birds, thus spreading the impact of this new problem beyond the water.

The results of both of these diet changes–whether it’s the new buffet item in the Great Lakes or the scumbag parasites of the stickleback–have yet to be fully determined, particularly in how they will impact the fisheries of these two habitats.

Full story on the warm-loving parasites:

One thought on “Eating to Live AND Living to Eat; Shrimp and Parasites”