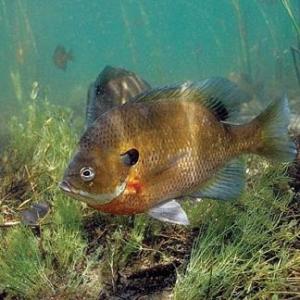 Posted by Nick Reeves: Researchers have found that a fish’s personality may determine how it is captured. This could impact fish populations and the quality of the fishery. The researchers say that anglers who fish near rocky outcrops or areas with underwater vegetation will more likely catch timid fish where as those who fish open water will catch bolder fish. Biologist and author Alexander Wilson states that boldness is a personality trait that interests behavioural biologists. Personalities of Bluegill Sunfish caught by angling and beach seining were examined during the tests. Wild fish caught by angling were more timid than wild fish caught by seining. After the wild fish were caught by seining, they were released into a large outdoor pool and anglers fished for them, with the bolder fish caught most often. For more information visit https://www.sciencedaily.com/releases/2011/10/111004151635.htm