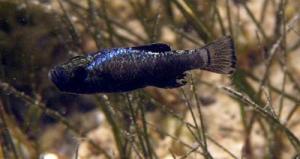 Two groups of pupfish, one from a Caribbean island and the other from the Yucatan peninsula of Mexico has been reported to have some of the fastest rates of evolution known in the animal kingdom, according to UC Davis.

There are approximately 50 species of pupfish found from Massachusetts to Venezuela.   They all pretty much look the same and have similar behaviors by  consuming detritus and algae off rocks.   There are however always exceptions.

One of the three pupfish found within the shallow lakes of San Salvador Island in the Bahamas have been observed biting scales off other fish species.   Other species of pupfish have been seen consuming small snails and clam shrimps.   No other pupfish are known to consume scales. Pupfish change the shape of their mandibles in order to cope with their specialized diets.

Pupfish from the San Salvador Island and Yucatan have shown traits of explosive evolution, changing up to 130 times faster than other pupfish found elsewhere.   It is not clear why pupfish within these two localities are evolving at such a high rate.   The lake water is  hot and salty, like other locations inhabited by pupfish.   Other species such as mosquito fish, which co-inhabit the same area   have not shown signs of fast change.