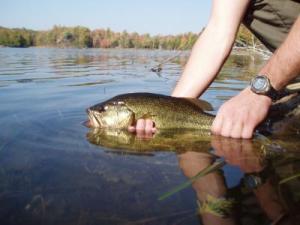 Posted by Nicholas Rabung: On September 30, 2011 researchers from the University of Illinois were doing tests to see if Larger fish recover faster than smaller fish do. “The point of the study was to replicate an angling situation where anglers catch and release fish,” said researcher Cory Suski. Another reason that they did these tests was because they wanted to know if large and small fish have a similar physiological response, reguardin the time it takes a fish to recover after exercise. These studies would also be very important for fisheries conservation. They did their studies on large mouth bass and found that the larger fish exibit elevated concentrations of plasma glucose and sodium, but the smaller fish didn’t show as much of these symptoms. This study just goes to show how rare these big fish are, and how we have to gently release them back into the wild so that they can be caught again. For more information look on the link below.

One thought on “Smaller fish recover faster than larger fish.”