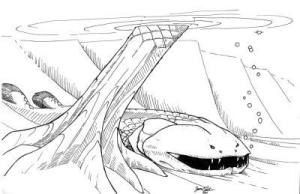 Posted by Leah Ailes: In Tiktaalik, an Arctic part of Canada, a new ancient species returned from the Devonian period. This new
species that I speak of is called the Laccognathus embri. The Laccognathus embri was named by Drs.
Edward Daeschler and Jason Downs in respect to Dr. Ashton Embry. Dr. Ashton
Embry was a Canadian Geologist, who opened new doors for paleontologists. By
opening new doors, it allowed Paleontologists to find new species like the Laccognathus.
The Laccognathus has lobed fins, sharp teeth, and is about 5 to 6 feet long. The fossils of this species
were discovered about ten years ago. Ironically, this new species was found in
the same place as the fossils. I think everyone should check out this article
because it is really neat to see how species have developed overtime.

One thought on “New Species of Ancient Predatory Fish Discovered!!!”