By Lonewolf, Xavier: Charlie Kerfoot’s Doughnut has been disintegrating over time, and the prime suspect is European mollusk. Both the Charlie Kerfoot’s Doughnut and the invasive European mollusc existence in Lake Michigan were unknown until W Charlie Kerfoot and his research team revealed it in 1998. The team discovered that the algae doughnut is created during winter storms, which disturb sediments that releases nutrients. The team determined the components of the doughnut, which includes zoo-plankton and phytoplankton. The disappearance of Charlie Kerfoot’s Doughnut could lead to ecosystem downfall. Crumbling of zooplanton and phytoplankton, which makes up the base of the food chain, will cause a struggle for plankton consumer. The chain reaction will continue until it reaches the top of the food chain. 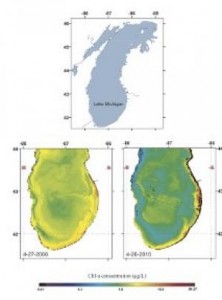 One thought on “Ecosystem of Lake Michigan May Crash”