Aquaculture scientists have just announced that they have made a step towards converting the Atlantic Bluefin Tuna to a farmed species. With its huge metabolism this poses some issues. Looking at the other farmed fish of the sea, there are problems already at hand. The farmed Atlantic salmon   are causing problems for the native run fish that originally lived in the waters used to culture them. They have also been posted by some as fish not to be eaten because of some harmful chemicals that are accompanied by fish farming. Cultivating these Tuna could arguably be worse for the ocean and humans than farming the salmon has been. Instead of fish meal which is fed to the salmon, Tuna are predatory fish that need forage to survive. It has been found that 5 to 15 pounds of forage fish such as herring and sardines are needed to produce 1 pound of Tuna. At this rate the effects of farming Bluefin could be catastrophic to forage populations. We are running out of these enormous fish. Is the answer to farm them or leave the species alone to possibly be harvested to extinction? 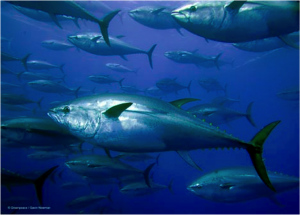 3 thoughts on “Taming the Wild Tuna”